Ok. There are going to be a huge amount of dissenters to what I’m going to write in this post, but write it I must, just to get my head round an extraordinary talk I listened to yesterday by some guy who looked like he must live in Totnes or Glastonbury, living on Goji berries and green tea and doing an awful lot of Yogic flying in his Solar paneled Yurt. He was talking to business leaders in Jersey. You know the sorts, bankers, IT; the sort of people I have a hard time justifying their wages and what they do for their money. Anyway. It was weird. This guy was here to talk about Social Leadership. To be honest I had no idea what this was. And I had no idea what this had to do with educa 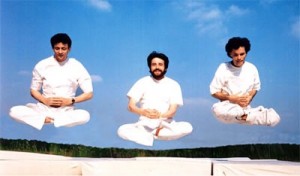 tion.  I guess we can always see connections between anything we learn or engage with. This was no exception, but my head is a bit weary after a long half term, and I have a feeling that this post will not be the last as I unravel what this means.

Back to the talk. Social leadership is about working for and with your community. It’s about the stories your organisation tells, its reputation and how it connects with its community. You can see the Yogic Flying thing now can’t you? But wait, this actually means something. It means a great deal infact, because as the talk meandered on, a myriad of examples were used to explain just how powerful this is. We live in a social age. We are connected with each other like never before. We have extraordinary access to information about just about anything you can imagine. This information gives us the power to be far more discerning than ever before. Julian gave a great example at the start of his talk about his local record shop in Amsterdam. He asked the audience whether they had bought any albums recently, some guy piped up with ‘Coldplay’. He didn’t look that impressed. Well.. It was a room full of businessmen. On entering the shop, he can make a whole range of choices about what he chooses to buy. He can ask one of the workers in the shop- the local experts, with their biases for particular styles of music who might lovingly send you down an alleyway of thrash metal or symphonic suites or he could just get out his phone, peruse the Internet, look at what’s new, look through band websites, listen to albums before choosing, look at comments, look through Wikipedia. In minutes, we can become highly informed about our choice. We can also choose where we buy it from. The world has changed. I remember buying TDK tapes and recording the top 40. This was how I got my information, this is how I developed my taste in music as a spotty teenager. Making mix tapes and listening to them on my Sony Walkman. Kids these days can watch videos, follow their favourite bands on Twitter, interact with fans across the world. Make their own versions of those songs, write blogs about it, read blogs, make vlogs, online fanzines, DJ from their iPad, share, like, favourite all within minutes. You see, it is a different world! There is no discussion about this. Kids learn and interact socially in ways many educational institutes just don’t want to engage with.

In addition to this, as Julian kept telling us, is that how we work, learn and become successful now, will be deeply transformed 5 years from now. He gave the examples of how Uber, AirBnB and PayPal have changed the face of how we choose to enage with particular services. There are now more rooms on Air BnB than there are hotel rooms in the entire world. I had only heard of this a year ago, now it’s just accepted as the most interesting and easy way to stay somewhere for a huge amount of the global population. 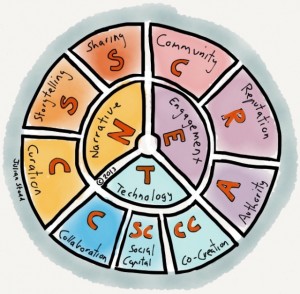 He spoke about how businesses will have to be far more agile and socially conscious to become businesses where people will what to work. As I stated earlier, the ‘story’ of any company or institution or individual will be its most meaningful currency in the future. Employees will look at what the companies social story is, what it stands for, how it communicates with its community rather than what the wages are or the pension plans. Those things will always be important, but the social aspect of ourselves and those of who we work with and for are becoming inextricably linked to who we are as people. And before you say this is mad, this guy is working with global corporations in Singapore, the. U.S. Even Saudi Arabia, the NHS, the NYPD, Facebook… All of these companies want his expertise on how to be agile in the social age. How to tell the right story. How engage differently with communities. How to work with completely different social structures to make their companies and employees successful in the social age.

What was really interesting is he started to talk about our moral and social responsibilities as leaders. He said that it’s not the naughty people we have to worry about, it’s about how we react to this. What sort of culture permits this kind of behaviour to be the norm? The transparency of our actions is there for all to see in the social age. Social leaders lead through influence, not authority. We lead through our actions, the stories we tell, what kind of respect we have with our community. It’s was at this point I started to think about schools. The stories we want our students to tell as they learn in our institutions. Is the currency of a handful of GCSE’s enough anymore? What is it that our students need to leave with? Can schools adapt to give them more than exam qualifications?

We have to be honest with ourselves. Is the model we have regarded as the only way, the only way? Is it obsolete? After this talk, it made me question this. For me, the juries out. There has to be a space for collaboration, working in communities, building a story for our young people that reflects the world we live in. Cultural capital has to have a space within this world, but after this talk, I have come to the conclusion that there has to be something else alongside this. Social capital. We are different people, our young people learn and interact socially in ways I never thought possible when I took my PGCE all those years ago, but the story of education remains the same. I’m starting to sound like Sir Ken, but there is no getting away from the fact that what the world looks like now, will be significantly transformed 5 years from now. Will education follow suit? Will we be able to cling onto the traditional structures of how we learn and what is important to learn? I have no idea. I do believe however, that a tipping point may be coming sooner than most of us would desire.